You know there are certain things that are going to have to happen in life, despite not wanting some of these things to occur. The ineviatble will eventually happen and you’ll just have to run with it. Well, as the parent of a deliciously-wonderful two year old, I’ve been actively avoiding the internal debates about when to start him with the old toilet training.

You can understand the thoughts of putting it off right? It means my baby is well and truly growing up (avoiding those thoughts!); there’ll be more mess, more time needed to go everywhere/do anything, MORE WASHING…how can there be more I constantly ask myself. Well with all that on-board, I’m just about sure you understand my less-than-enthusiastic response to getting him all TT.

I did have a little revelation though: as Little Mate is in cloth nappies, there may actually be LESS washing. Hear me out, hear me out…Sure, I’ll be folding more and more of his adorable pants, shorts, underwear and socks…but, I won’t be doing the cloth nappy washing. That will be two entire less loads that I’ll have to do (with the exception of night-nappies…I’m not that into the power of positive thinking/sleep deprivation).

It must’ve been this revelation, coupled with some wonderful play times together that convinced me I could do anything… I must’ve been lulled into a false sense of positivity, and I forgot what toilet training actually entails: I <irrationaly> DECIDED IT WAS TIME. It was time for the wet pants, the incessant questioning and interrogating of bowel movements and the prompting of visits to the bathroom to “squeeze, wipe, flush and wash”.

He was very open to the idea at the time, and I felt encouraged. In the last few weeks he has been very interested in reading the few books we have about using the loo…Maybe that was what was lulling me into the idea that it could be a good thing… However, it turns out Little Mate is not really open to the whole ‘learning to use’ concept. Instead, I’m sure he has this strong belief that he is already a pro at the whole thing, and doesn’t actually ever need to use the loo. Refer our constant conversation:

ME: “Little Mate, it’s squeeze-o’clock, want to come with me and we’ll read a story while you sit on the toilet/potty?”
LITTLE MATE, shaking head: “No, I’m pine, I’m pine mummy” (adorably, he gets the F sound mixed up with the P sound).
ME: “Come on mate, both Giggles Magoo and I are going to visit the bathroom, come along too and you can have two stories”.
LITTLE MATE: “No mummy, I’m pine. No queeze.”
<30 seconds later, you know how it goes: wet patches>
LITTLE MATE: “NO MUMMY, don’t touch underdants!!”
ME: “But little mate, they’re wet. Lets get you in a fresh set. Come and choose the ones you want. I have some awesome dinosaur ones or a bright red pair”
LITTLE MATE: “NO!!! My underdants stay on”
(how can I refute that sort of self-determination?)

Anyway, it’s obviously still really, really early days and I could at any point just abandon the whole thing and wait until he is demanding it be done… but, what’s life without a challenge? I’m going to celebrate the fact that despite his overall general disinterest, he was dry after both his weekend day sleeps (let’s not address his refusal to then sit on the loo afterwards).

Wish me luck – and tips! Send me your boys’ toilet training tips. Despite doing it before with Giggles Magoo (don’t worry, I don’t sport a 5 year old still in nappies), it has thus far been a VERY different experience. Giggles Magoo was sitting on the toilet from around 7 months old, and properly using it from about 20 months old. He was keen as mustard to be able to use the loo and get out of the nappy. It’s a good reminder that they are two vastly different children and have vastly different interests/ways of doing things.

Anyways, I’m on my way home from work to wash a bag-load of wet things, and just add to our internal drying station! 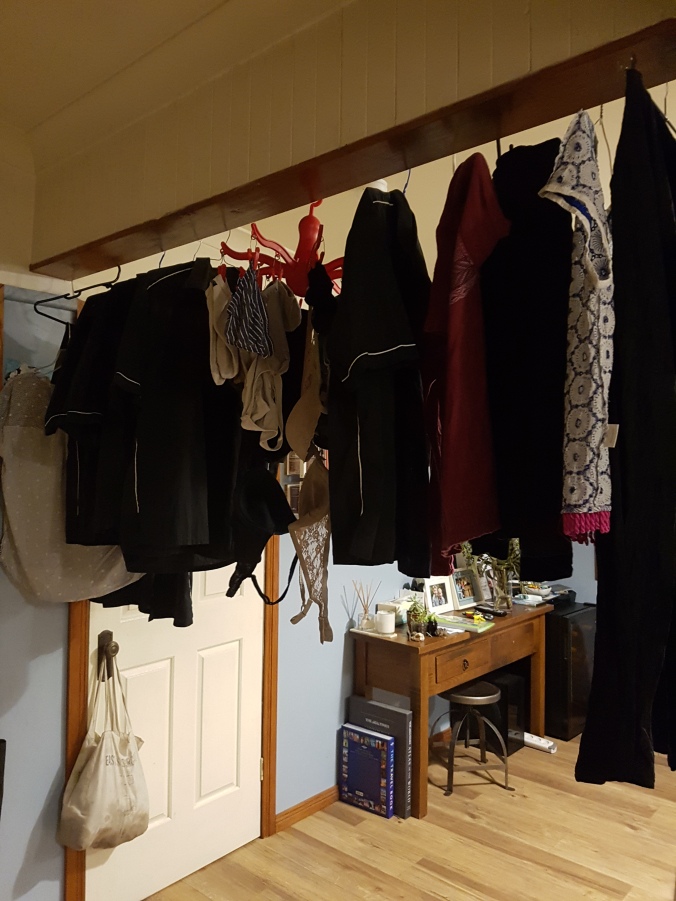 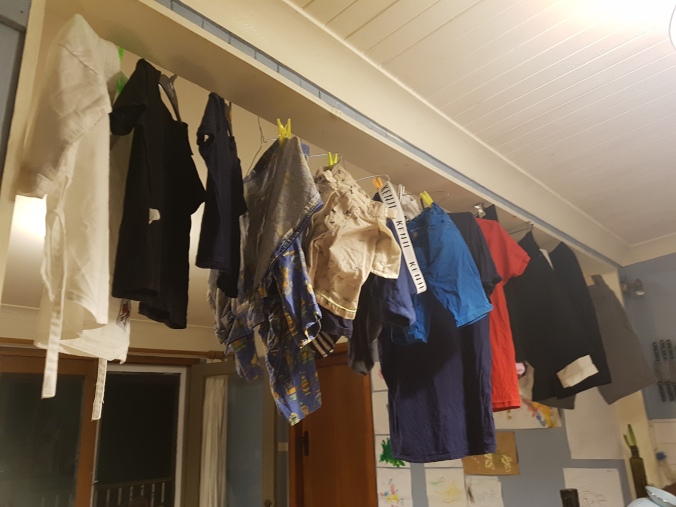